In the spring of 1775, rumors of conflict between the British government and rebellious colonists in New England began to be heard as far away as our community, now called Canaan. In the autumn of 1775, there unexpectedly came upriver an expedition led by Colonel Benedict Arnold, part of General George Washington's attempt to capture the strongest fortress on the continent, Quebec City, and win the province to the colonial cause. Benedict Arnold arrived in Skowhegan on October 4th, 1775, leading some 1200 men, and it was here that Arnold received his first offer of help from settlers. Joseph Weston volunteered himself along with two of his sons and a pair of oxen, and they helped Benedict Arnold and his soldiers, with their boats and baggage, climb the falls and cross over Skowhegan Island. It took about two weeks more for the army to proceed upriver to reach Norridgewock Falls, where the town of Madison is now located. Joseph later suffered a severe chill from exposure and died of a fever on Oct.16th. Weston was among the first American patriots to give his life for the new nation

Many of Arnold’s officers and men kept journals of the events of their journey including the passage over Skowhegan Falls. Here is what one soldier, Captain Thayer, wrote in his journal while passing through Skowhegan: "The carrying place is across an island...The people call this place Canaan; a Canaan indeed! The land is good, the timber large and of various kinds, such as pine, oak, hemlock and rock maple. Last night our clothes being wet were frozen a pane of glass thick, which proved very disagreeable, being obliged to lie in them...The people are courteous and breathe nothing but liberty."
Captain Abner Stocking, of Connecticut says, “We encountered hardships and fatigues with great courage and perseverance for the zeal we felt in the cause. When night came on, wet and fatigued as we were, we had to encamp on the ground. It was at this time that we were inclined to think of the comfortable accommodations we had left at home." 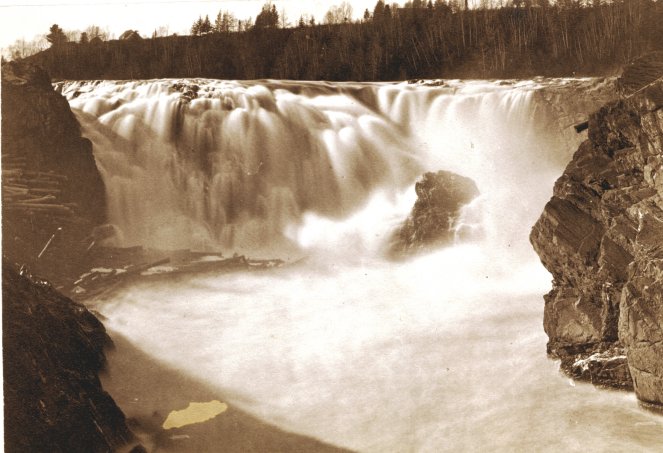 Captain Stocking goes on to relate the hardships of negotiating the falls and crossing the island."Though this was only sixty rods over, it occasioned much delay and great fatigue. We had to ascend a ragged rock, near on a hundred feet in height and almost perpendicular.” Though it seemed as though we could hardly ascend it without any burden, we succeeded in dragging our bateaux and baggage up it. These falls in Skowhegan caused Arnold's troops many hardships. Because of damage to several bateaux on the falls, many of their provisions were lost. Casks of peas and bread and fish were cracked open and the food swelled up and was no longer usable. There were still many miles to go before Quebec!

An expedition doctor, Isaac Senter, went to help a patient up the "Wassarunskeig (Wesserunsett) River."These were a very high water, and exceeding difficult carrying by.” After performing his visit, his party backtracked to the Kennebec, He describes the falls there, “After backing all the boats, provisions, camp equipage, etc., over, we again advanced up the river." They carried the bateaux by land and he says "Not far had we advanced ere we came to a fall called Scunkhegon. With a great deal of difficulty we passed this, but not without coming very nigh losing one of my hands. After passing these, I proceeded about half a mile and tented."

Here in town there are markers indicating that the army marched through. One of these markers is at the picnic area on Route 2 east, heading to Canaan. There is another one on the island in town. It is on this island that one of the soldiers left his canteen made out of lead and copper that now may be seen at Skowhegan History House.
Joseph Weston the second, son of Joseph, joined Arnold’s army here and had many adventures on the ill fated venture. After defeat and imprisonment, he eventually returned home to lead a full life and become a community leader.

The Arnold expedition must be classified as a nearly complete failure. This certainly was not the fault of the soldiers involved or for the most part their officers. The mission was hastily planned; their boats and equipment were faulty. Their food and supplies were poorly chosen and crudely packed. The worst problem of all was a lengthy delay that moved the start of their march from early summer until late fall. The men were not dressed for winter and frostbite and starvation caused many deaths along the way. At least one company disobeyed Arnold’s orders and deserted their comrades, returning downriver taking food and medicine with them. In the end, the assault on Quebec City failed and most of the exhausted soldiers were either killed or captured.

Canaan contributed only a few soldiers to the Rebel cause because the population was very small at the time. After the conflict ended, however, an influx of new residents was largely comprised of discharged military men who received parcels of land to pay for their services in the war. Many soldiers served without pay, even furnishing their own muskets. Later, congress authorized the purchase of lots in undeveloped communities like Canaan to be given to some of these men. Louise Helen Coburn’s Skowhegan on the Kennebec, a two volume history of Skowhegan, lists the biographies of eighty-one Revolutionary War soldiers who settled in Canaan.

This group of soldiers and their families gave a boost to the population and helped lay the foundation for the large growth and development of the 1800’s.